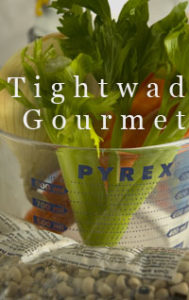 (March 4, 2009) – A good, inexpensive meal can center around soup.  With homemade soup you can control the ingredients – limit salt and sodium and leave out artificial ingredients.

The taste can be far superior to canned soups, but the basics should be followed.  And basic to soup is stock.  Stock can be based on beef, chicken, fish or vegetables.

A basic stock recipe consists of a quartered onion, a couple of stalks of celery cut on a bias into sections a couple of inches long, and a couple of carrots sliced similarly.  Add a little garlic, a little pepper, a little thyme and a bay leaf or two.  You fancy it up with a quartered turnip or, perhaps, some broccoli.  In other words, most any vegetable you can cook.  Add the vegetables to several quarts of water, raise the temperature to boiling, then reduce the heat to low and cook for several hours.

Supermarkets once gave away bones, but now they charge for them. Look for beef bones with good marrow.  Cook the bones with the onions, celery and carrots either in the oven or in a non-stick electric fry pan for about an hour at 475 degrees. Then add all to the water pot.  Clear the cooking pan with a little water – scrape the bottom to get all the good bits and add to the pot, too.

After cooking, drain the stock through a colander or other strainer and throw away the solids.  The liquid can be frozen for several months.  The stock forms the basis for you other soups.

Remember soup is the sustenance for body and soul. And it can be cheap.

Next post: Tightwad Assignment – Get free money from your employer